A legacy rooted in hospitality

Thanks to the support of people like you, Oglebay has touched the lives of millions over the past 90 years.

Continuing the legacy of Earl Oglebay

Over 100 years ago, a tradition of generous hospitality began at the summer estate of Earl W. Oglebay. Today, the picturesque beauty of Oglebay’s property has expanded to include 2,000 acres of year-round recreational activities and exceptional overnight accommodations amid the property’s natural beauty.

A history of Oglebay 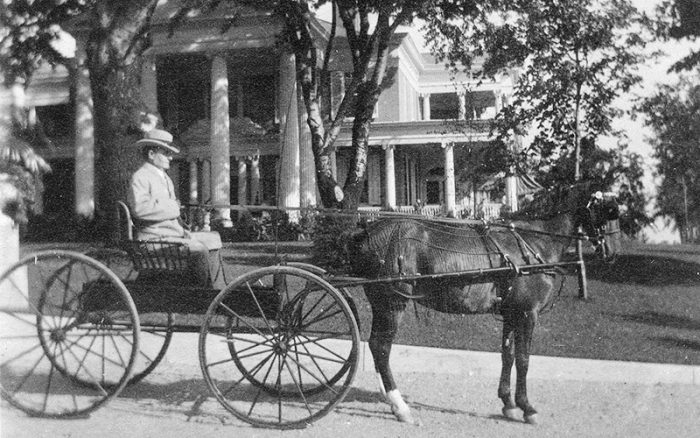 The history of Oglebay can be traced to the late 1700s, when a frontiersman named Silas Zane was awarded a land grant of 400 rolling acres in northwestern Virginia. This land remained in the Zane family until 1812. Over the years, the land changed hands several times. By 1888, the owner of record was A. Allen Howell, the father of Sallie Howell Oglebay. When Earl W. Oglebay purchased Waddington Farm from his mother-in-law’s estate in 1900, the property was just a 25-acre tract, but the astute Cleveland industrialist gradually developed the property until the farm was almost twice as large as the original land grant.

For 25 years, Mr. Oglebay spared no expense or effort in turning his property into a beautiful country estate and a model farm where research in soil culture and crop rotation was conducted. During these years, the mansion house was rebuilt, buildings were added, and much landscaping and road work was accomplished.

Upon his death in 1926, Mr. Oglebay willed his property to the people of Wheeling, for as long as they “shall operate it for public recreation.” In July 1928, the property was accepted as Oglebay Park on behalf of the people and placed under the governing hand of the Wheeling Park Commission. During the 1930s, numerous improvement projects were completed through federal relief programs. A Civilian Conservation Corps Camp of about 200 young men was located in the beech woods where the former Caddy Camp building stands. Gifts and loans were solicited to match the Works Progress Administration funds, making possible the building of nature trails and roads, picnic sites, cabins, tennis courts, an outdoor theater, Camp Russel, and the entire Crispin Center area.

Crispin Center, with its large outdoor swimming pool, golf center, and Pine Room area has changed little on the outside. Built from 1937-38 of natural sandstone, much of which was quarried locally, the facility stands as a tribute to the superior quality of Depression-era projects. Additional improvements to the Pine Room and outdoor pool area were designed to increase accessibility and improve customer service.

Realizing that a stable means for capital improvements must be established, officials inaugurated the Parks System Trust Fund in 1945. Since then, most new facilities have been developed through contributions and bequests to the trust fund: in the 1940s, tennis courts, a riding academy, and the first winterized cabins; in the 1950s, picnic shelters, horse show ring, golf driving range, tennis shelter, three-acre lake, a nature center, and the long-planned Wilson Lodge. The opening of the lodge in 1957 was a turning point for Oglebay, transforming the property into a year-round destination.

The picturesque Par 3 and Driving Range Clubhouse on the north side of the park became a reality in 1962; a beautiful garden center was built in 1964; and a fireproof wing was added to the mansion in 1966, through the generosity of Courtney Burton, grandson of Earl W. Oglebay. Most of the Oglebay memorabilia on display, including portraits, genealogy, furniture, and photographs, were collected by Mr. Burton. In honor of Burton’s involvement in more than 15 major building projects at Oglebay, the “hilltop area” was named the Burton Center in 1978 by the Wheeling Park Commission.

In the late 1960s and 70s, the park commission leveraged state and federal programs, matching grants with trust fund monies to further improve the park. Construction began on the Robert Trent Jones, Sr. designed Speidel Championship Golf Course, with the front nine opening in 1970 and the back nine in 1971. In 2000, another championship golf course, the Arnold Palmer designed Klieves Course, opened next to the Jones course. Together, the two courses form the Speidel Golf Club, serviced by the Hamm Clubhouse.

The 1970s and 80s ushered in several large-scale events: the first Wheeling Classic (LPGA) was held in 1974 (the tournament lasted 11 years); the first Oglebayfest, celebrating Oglebay’s 50th anniversary, in 1978. In 1985, the Festival of Lights debuted, with 125,000 lights adorning trees, buildings, and landscape across 125 acres. By 1990, the size of the show had more than doubled, with lights and displays now spanning 300 acres. Today, Festival of Lights is a popular tourist attraction that is regularly updated and improved to delight guests from across the country. This annual show has earned a permanent spot on the American Bus Association Top International Events list.

Continuing improvements at Oglebay are a reflection of the generosity of many individuals and foundations. Sections of the Arboretum Nature Trails were completed in 1973-1979. The 35-acre Good Zoo opened in 1977, the Benedum Planetarium in 1978, and an addition to Wilson Lodge was dedicated in 1980. Oglebay offers 54 vacation cottages, including 2 estate houses, and 3, 8-bedroom premium cottages, which were completed in the summer of 2008. Over the years, many of the group picnic shelters have been replaced or renovated, including Hess Shelter, Levenson Shelter, and Haller Shelter.

Carriage House Glass opened in 1992 and honors the West Virginia glass industry. The building is reminiscent of a pre-Civil War carriage house that once stood in the hilltop area. Carriage House Glass offers visitors a unique, first-class shopping experience, along with glass blowing demonstrations and a noted early glass and china museum on the building’s lower level.

Oglebay’s 10-acre gardens have been restored to resemble Sallie Oglebay’s (Earl Oglebay’s wife) beloved flower beds, dating back to her residence in the early 1900s. Today, visitors to the gardens can enjoy a three-season kaleidoscope of color as they follow the meandering red brick walkways past sweeping beds of vibrant blooms and hanging baskets. In 1994, the gardens, arboretum, and outdoor theater area were made handicap-accessible for the enjoyment of all guests.

In addition to educating guests about wildlife conservation, the Good Zoo has expanded its mission to breed endangered species. To further this mission, the zoo has added a cheetah to the collection, along with Grevy’s zebras and red pandas, an indoor Discovery Lab next to the rare albino alligator, a Wonders of Wetlands exhibit with white-naped cranes and bald eagles and an Australian Outback exhibit with kangaroos and wallabies. The main zoo building, completed in 1996, includes a classroom, multipurpose room, dining facilities, gift shop, and a large, handicap-accessible elevator. The ski area, located at the Par 3/Driving Range reopened in 2004 after a $1.2 million upgrade that included a triple chair lift, snow-making equipment, and rental skis and snowboards. The reopening of the ski area was made possible by an active fundraising campaign led by community members.

Expansions to Wilson Lodge include dining room renovations in 1989 and 1999, and the addition of a conference center wing in 1997. In 2006, Wilson Lodge once again underwent major construction with the addition of a 53-room sleeping wing. The new wing opened in May of 2006 and features deluxe king and double queen rooms and suites. This $15 million construction project also included a complete redesign and renovation of existing guest rooms. The 5,000 square foot West Spa and six new king rooms were completed in the summer of 2008.

Today, Oglebay is a beautifully landscaped, 2,000-acre public park, studied by planners worldwide as the only self-supporting public municipal park in operation in the United States. It stands as a successful tribute to Earl W. Oglebay, a notable achievement of the Wheeling Park Commission, and a credit to the many benefactors and organizations involved in its growth. While Oglebay is operated mainly through guest revenue, the park offers more free activities than any other operation of its type in the country.

Wheeling Park, Oglebay’s sister park, is a 406-acre property located minutes from Oglebay. The historic White Palace at Wheeling Park is a premier venue for banquets, weddings and other special occasions. Together, Oglebay and Wheeling Park make up the Wheeling Park Commission.

Start your own legacy

Begin a legacy of your own by considering a charitable gift to Oglebay Foundation.