There has been a Wheeling Park since before the turn of the 20th century. Until it was deeded to the newly-formed Wheeling Park Commission in 1925, however, the property was in private hands. First, it was an estate so beautiful that people came from miles around to walk the grounds. English immigrant Thomas Hornbrook welcomed his visitors to “Hornbrook’s park.” Later, it became a private amusement park complete with arcades, amusement rides and games, holiday celebrations, and a swimming pool and casino.

In its heyday, old Wheeling Park was owned and operated by the Reymann Brewing Company, who patterned it after the colorful German beer gardens. Sarah Bernhardt, the incomparable French actress, appeared at the park’s Casino in 1905, and the building was the scene of plays, operas, and musical shows.

Changing tastes, World War I, and the pending shadow of prohibition led to its closing in the late teens. Soon after, Wheeling Park was deserted and run-down. City movers and shakers, backed by city government and the Chamber of Commerce, had high hopes of raising funds to purchase the park for public use, but their first attempt — in 1923 — was not successful. Otto Schenk, president of the Chamber, refused to let the issue die. 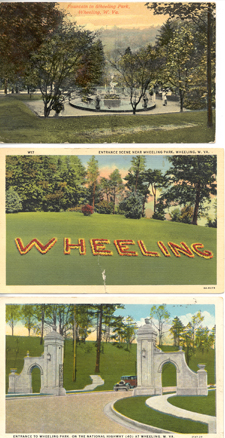 In mid-December of 1924, two Wheeling businessmen, Charles Sonneborn and Louis Haller, took an option on the 130-acre property with the intent of subdividing it. First, however, they offered to give up this opportunity if public funds in the amount of $350,000 were raised to buy and equip the park, and if it would be placed under non-political management. They announced their offer in the newspapers and gave the plan two weeks to succeed.

The story of Wheeling Park might have ended that December, its prime acreage sold off for residential development, but public spirited citizens did not let it happen. Immediately after the offer was made public, W.E. Stone, prominent businessman-philanthropist, offered to give the first $100,000 if several conditions were met, the most important: placing control and management in a non-partisan commission. Stone asked that the commission be made up of five members; two appointed by the mayor of the City of Wheeling and three selected by the president of the Chamber of Commerce.

Stone’s offer drew other pledges in substantial amounts, including one by prominent industrialist Earl W. Oglebay of Cleveland (Oglebay summered in Wheeling at his estate called Waddington Farm). By 7:30 p.m. on Christmas Eve, more than 170 pledges by individuals and groups assured that the goal had been reached. In its headline on December 25, the Wheeling Intelligencer proclaimed “Wheeling Park is a Christmas Gift to the Wheeling Public.” Outdoor concerts have always been a popular pastime for Wheeling residents.

When the formal transfer of the property to the city took place in April, 1925, members of the newly-created Wheeling Park

Commission (WPC) were already hard at work transforming the old amusement park into a useable recreation area. Wheeling Park opened to the public on Decoration Day — now called Memorial Day — May 30. More than ten thousand people turned out to enjoy a band concert, picnicking, the playground, and informal activities.

The Casino and swimming pool were renovated and opened during that first summer. Work on a nine-hole golf course was ongoing, anticipating an official opening in the spring of 1926. Although the course was constructed by a local crew, mule skinners and three-mule teams were hired from Patterson Construction of Pittsburgh, builders of the famous Oakmont Country Club course, to rough-in the greens.

The “people’s park,” Wheeling’s first public park, was an instant success. On the 4th of July, twenty thousand people and five thousand automobiles passed through the gates. From the beginning, park commissioners had their hands full coming up with funds for necessary improvements and additional facilities at the long-neglected park. 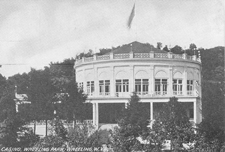 When the Wheeling Park Casino burned in 1925. The White Palace was constructed in its place.

Adding to the urgency was the sudden, unexpected loss by fire of Wheeling Park’s most important facility, a multi-purpose building called the Casino. Once again, those who believed in the importance of Wheeling Park went to the public and successfully raised funds to rebuild. The White Palace, officially named the Otto Schenk Memorial Pavilion, opened in June, 1926.

In 1936-37, during the post-Depression era, a new swimming pool was built with funds from the Public Works Administration and a generous gift from W. E. Stone. It replaced the obsolete, overcrowded pool that dated back to the early years of the amusement park. When it opened, the Wheeling Park pool was the largest and most modern in the area, attracting hundreds of thousands of bathers over a thirty-year span before it was replaced by the current pool and clubhouse.

Wheeling Park has matured gracefully. Some of her older points of interest are still there: the handsome Sonneborn gates, the impressive “Madonna of the Trail” statue (erected by the Daughters of the American Revolution in 1928 to honor the sacrifices of the pioneer women), the charming Frank Rock Garden, started in 1929, the Schwertfeger Shelter, and Stifel Playground, the latter two facilities finished in 1948.

Construction of the Memorial Ice Rink changed Wheeling Park into a year-round facility when it opened in the fall of 1959. Built near the old swimming pool, adjoining the White Palace, the rink quickly became a popular winter destination. Almost immediately, families from all over the valley staked out a “second home” at Wheeling Park; it seemed like everyone was into recreational skating — or figure skating — or hockey. Many of the original structures remain in the park today.

Wheeling Park’s dramatic increase in acreage came in the 1960s with the gradual purchase of almost three hundred acres of contiguous property. Expansion on the eastern side of the park, despite its hilly terrain, was seen as the only way to develop additional facilities at the landlocked, heavily used recreation area.

Dedicated in 1968, the W.E. Stone Memorial Clubhouse and Pool was the second major year- round facility opened at Wheeling Park. Designed to accommodate both recreational and competitive swimmers, the handsome Z-shaped pool features fifty-meter lanes, a diving well, and a separate area for toddlers. The multi-purpose clubhouse provides a casual setting for parties and receptions, a pro shop to serve golf and tennis, a bathhouse, and two snack bars. A water slide was added to the complex in 1979 and was later replaced with a tube slide.

With Wheeling Park firmly established as a popular year-round recreation facility, the park commission continued improvements throughout the 1970s and 80s. Renovations at the Good Lake include a boathouse, dock, and miniature golf course, all added in 1972. A tennis air dome, for indoor play, was erected the same year. Winter tennis remains popular so the dome has been replaced twice.

Development on the hilltop property got underway with construction of the Sonneborn group picnic shelter in 1973. Designed with an open fireplace, and complete kitchen and restroom facilities, the spacious shelter features laminated wood trusses on the interior. Antique brick, to blend with the Stone Clubhouse, was used on the exterior. Soon after, six new Har-Tru tennis courts were built and the Boyce Tennis Shelter was added in 1984.

A significant part of the hilltop development is the complex of soccer fields built in the late 1980s. This quality facility, together with the pool complex, ice rink complex, playground and White Palace improvements, well serve the youth of the Wheeling area.

In the first decade of the 21st century, hundreds of thousands of people annually visit the beautiful grounds where Thomas Hornbrook once welcomed the public. Renovations and improvements are accomplished as funds become available according to a recently-revised master plan. Wheeling Park remains a “people’s park,” accessible by public transportation, and beloved by all who use the 406-acre park year-round for casual and organized outings. From sports tournaments to day camp, holiday dances to picnics and outdoor band concerts, activities now span the seasons. The vision of Otto Schenk and W.E. Stone has been fulfilled.

Our sister park in the Wheeling Park Commission: Oglebay